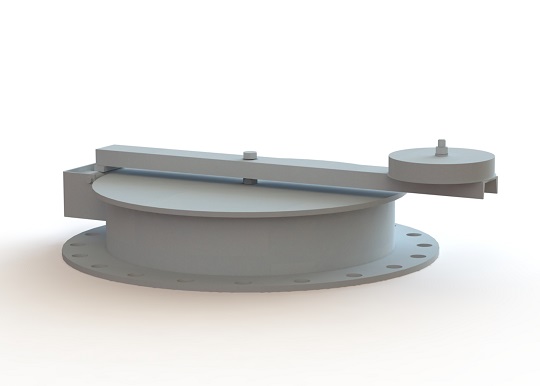 While both provide emergency pressure relief for storage tanks exposed to external fire, the Protectoseal Series 52600 also provides vacuum relief. Ever since the sixth edition of API 2000 (API Standard for Venting Atmospheric and Low Pressure Storage Tanks) was launched, tank designers had to consider the more stringent tank vacuum relief requirements. The required tank in-breathing rate is often much higher than the required out-breathing rate, such that the in-breathing rate determines the conservation vent’s size.

According to Laetitia Botha, Energas Technologies Product Engineer, “The Protectoseal Series 51700 Hinged Emergency Pressure Manhole Cover is designed to be installed on the manhole openings of tanks and helps to relieve large volumes of vapours beyond the capacity of the regular operating conservation vent. In comparison, the Series 52600 Emergency Pressure/Vacuum Relief Vent is designed to offer similar capacity emergency relief, but has the added benefit of offering vacuum relief. This vacuum relief capacity supplements the existing vacuum relief capacity of the conservation vent and as a result a smaller conservation vent can be selected.”

Protectoseal vents are mostly used by petrochemical refineries and at fuel depots, but are also common in the chemical, pharmaceutical, paper and food industries. They can be supplied in exotic material or in fibreglass reinforced plastic for corrosive environments.

The Protectoseal Series 51700 emergency vent replaces the Series 51600 hinged type emergency vent. The weight package is now positioned in the horizontal plane and the new design features an extended set point range. It provides an effective vapour-tight seal when positioned on the flange seat. In an emergency situation, the cover is able to pivot open on its hinge, relieving the pressure and preventing associated damage, after which the cover automatically closes again.

Due to the design and lightweight properties of the Series 51700, the unit offers easy access through the manhole opening for tank inspection and maintenance. Its lever arm loading capabilities and hinged design allow for higher pressure settings than are available on other dead weight loaded vents of similar size. These vents are all factory-set by Protectoseal, are subjected to a leakage test and provide reliable emergency venting when required. The hinged type emergency vent automatically recloses once the conditions have returned to normal to minimise the amount of vapour unnecessarily vented out. “This is an especially important feature for our customers, because of the increasing demands on factories and refineries to reduce emissions,” remarks Botha.

The Series 51700 is weight loaded, so its set point doesn’t change over time. Set points are accurate to within +-3% across the entire range of pressure relief settings. This level of accuracy is made possible with Protectoseal’s stringent machining, assembly and testing processes. The unit boasts air-cushioned seating with a flat, smooth FEP film diaphragm, supported on both sides of an annular channel, forming a floating air seal within the seat. An outer support rim ensures proper seating.

All Protectoseal pressure vents are leak tested in the factory and are only released when the leakage rate is less than 1 standard cubic foot per hour (SCFH) at 90% of the set point. The Series 51700 is available in 16″ (DN 400) through 24″ (DN 600) sizes. The unit is flanged to mate with standard flanged 150# ANSI, API (20″ or 24″ only) or DIN PN 16 bolting specifications and other drilling patterns are also available upon special request. The vent is in conformance with the European ATEX Directive. Botha notes, “Energas can perform sizing and selection of tank vents in accordance with API 2000 and issue pressure versus flow curves.”

In emergency situations, such as an external fire, normal venting devices will be too small to relieve the amount of vapour given off. Similar to the Series 51700, the Series 52600 has a large capacity and is intended to relieve this emergency vapour flow. The unit’s integral vacuum vent gives the tank extra protection against possible collapse in the event of excessive vacuum in the vapour space. The maximum normal inbreathing rate of the tank can be shared between the conservation vent and the vacuum portion of the emergency vent, resulting in a smaller conservation vent size.

The Series 52600 is able to offer this protection by providing an effective vapour-tight seal until the pressure of vacuum relief is required for tank protection. The integral vacuum vent is spring-loaded to be able to relieve at a vacuum of 0.215 kPa. A fitted wire mesh screen prevents any foreign objects from entering the vent or tank. The pressure relieving pallet is specially designed to lift far enough to flow its rated capacity in the event of high tank pressure, after which it automatically reseals once the pressure is reduced. The unit’s flange-mounted guide posts make for proper guiding and positioning of the pallet on the seating surface. Leakage on the pallet is no more than 1 SCFH at 90% of the set pressure, as is standard for Protectoseal vents.

Proprietary design of the unit makes for easy handling during installation, inspection and maintenance and, like the Series 51700, it also boasts accurate pressure setting maintenance capabilities, with set points accurate to within +-3% across the entire range of pressure relief settings.

The Series 52600 also has an air-cushioned seat with a flat, smooth FEP film diaphragm, supported on both sides of an annular channel, which forms a floating air seal. It is available in 16″ (DN 400) through 24″ (DN 600) sizes and is flanged to mate with flat face flanges, 150# ANSI, API (20″ or 24″ only) or DIN PN 16 bolting specifications. Other drilling patterns are also available upon special request.

“The Protectoseal Series 51700 and 52600 are both high quality products specifically built for emergency relief on large storage tanks. These vents feature high capacity, but also extremely low leakage rates of less than 1 SCFH at 90% of the set point. This leakage rate remains this low irrespective of the vent’s size. This is the type of innovation we at Energas Technologies appreciate from our suppliers, because it translates to bringing our customers a versatile and ever-expanding range of products that can adapt to their evolving needs,” Botha concludes.